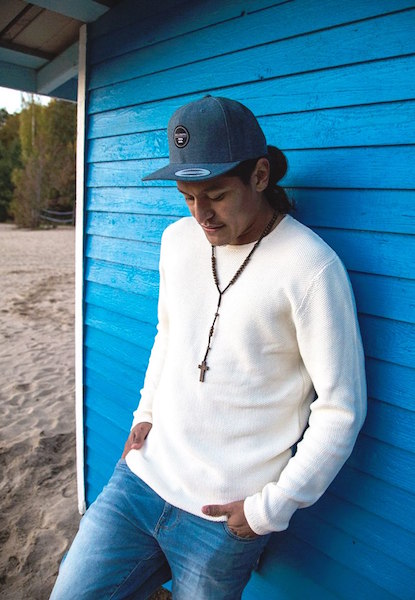 Bené Rodriguês was born in 1988 in a poor neighborhood in the city of Fortaleza, Brazil. Today he lives in Finland expressing his childhood memories and homeland sceneries through art.

He became interested in art at the age of 11. Back then he used to draw on the walls of his home. As an adolescent he discovered together with his friends the street art called ”graffiti.” (In Brazil the artistic exercise of graffiti is legal.) For him, graffiti was a way to express strong feelings and the life in the urban setting.

”What I like about graffiti is that there are no rules. You are free. The street is your gallery and the wall is your canvas. Everyone who passes by will see your art.” says Bené.

Bené started painting on canvas soon after discovering graffiti. Having very little income he used to make his own canvas from an old sheet. At the time Bené was working with serigraphy and used to take the leftover paints home. For a long time those were the only paints available for him. Despite the lack of good materials, Bené was developing his skills as a painter. He was able to get a few exhibitions and sold some paintings to friends.

”Back then I was so excited in painting with whatever material I had in hand. Everything I saw I wanted to pass to the painting: birds, hills, flowers, everything. I admired professional painters and my dream was to become one myself.”

Bené has been painting various topics using different styles and techniques. From a peaceful morning in the beach to vibrant colors of the Amazon birds Bené has not been caged to a specific theme. However, his latest artistic approach is all about contrast. Through his art he wants to express the reality in Brazil. Sceneries he has experienced and testified in his own childhood. Each and every one of these paintings tell a story. It is a story of suffering and facing obstacles, but also a story of conquering and hope. It is almost as if the painting came alive in front of one’s eyes.

”The strong colors in the background create a beautiful contrast with the characters that are black and white. Through this contrast I want to express how people are often unseen in the society in Brazil.” tells Bené.

With this new approach he feels he is able to express something different. Every day he wakes up with a new idea, a new story to be told. He hopes that people could appreciate the real stories behind these paintings and adopt them as their own.

Bené has also used his talent for doing good. While living in Brazil he runned a small social project where he teached kids from poor backgrounds to do graffiti and to paint. Some of those kids today have part of their income from graffiti.